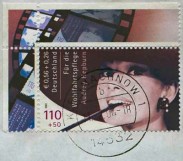 The Christian and Jewish festival embodies many pre-Christian traditions. The origin of its name is unknown. Scholars, however, accepting the derivation proposed by the 8th-century English scholar St. Bede, believe it probably comes from "Eostre", the Anglo-Saxon name of a Teutonic goddess of spring and fertility, to whom was dedicated a month corresponding to April.

Traditions associated with the festival survive in coloured Easter eggs, originally painted with bright colours to represent the sunlight of spring, and used in Easter-egg-rolling contests or given as gifts. 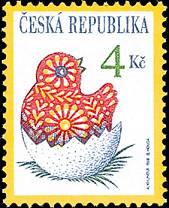 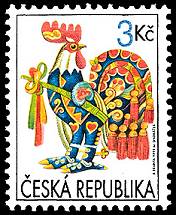 Czech Republic 1998. Decorated Easter Chicken breaking out of its shell.

Russia 1993. "The Ascension". Modern Lacquer painting from Fedoskino on a Russian Easter Egg from the 20th century.

Czech Republic 1999. An ornate cockerel with a traditional plaited willow stick under its wing, proudly inspecting its colorful plumage.

Festivals of this kind, and the stories and legends that explain their origin, were common in ancient religions. A Greek legend tells of the return of Persephone, daughter of Demeter, goddess of the earth, from the underworld to the light of day; her return symbolized to the ancient Greeks the resurrection of life in the spring after the desolation of winter. 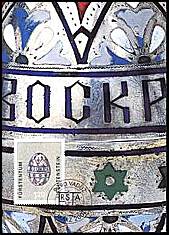 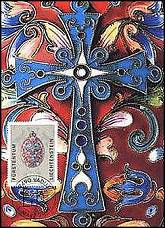 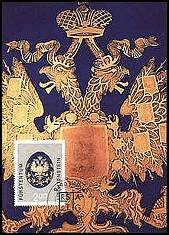 Many ancient peoples shared similar legends. The Phrygians believed that their omnipotent deity went to sleep at the time of the winter solstice, and they performed ceremonies with music and dancing at the spring equinox to awaken him. The Christian festival of Easter probably embodies a number of converging traditions; most scholars emphasize the original relation of Easter to the Jewish festival of Passover, or Pesach, from which is derived "Pasch", another name for Easter.

Sweden 1999. Sugar eggs and decorated paper eggs, filled with candies, are popular Easter presents. Neither of the Swedish stamps have face value, but are marked "Inrikes Brev".

The early Christians, many of whom were of Jewish origin, were brought up in the Hebrew tradition and regarded Easter as a new feature of the Passover festival, a commemoration of the advent of Messiah as foretold by the prophets.