Sometimes, it's what's inside that counts!

Sometimes a non-descript cover can hold vast historical treasure inside, just waiting for whoever takes the time to read it. This cover was found for C$10 (US$7.50) in a dealer's box at a recent stamp show. 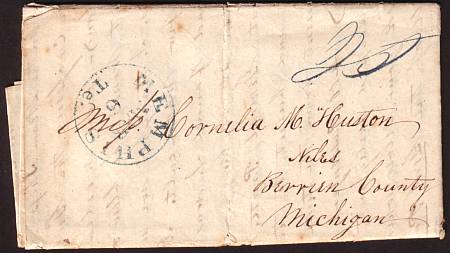 The cover is addressed to "Cornelia M. Huston" and postmarked "MEMPHIS / Te. / MAR 6" (Memphis Tennessee, March 6 [1843]). The year is not included in most datestamps of this period, but is readily apparent from the dateline inside the cover. The blue manuscript "20" (cents) is the postage rate paid in advance for delivery to Niles Michigan, an old established community on the banks of the St. Joseph River in Michigan, just east of Lake Michigan.

So much for the "postal" history. From here, I will let the letter speak its history for itself: (The term [sic] means that the spelling or grammatical error is in the original document)

Author's Notes:
Sam Houston of Texas and the "Bowie Knife" (an invention of Jim Bowie of Alamo fame) are legendary in US history. The Tennessee earthquake of 1843 is described on the US Geological Survey's page Earthquake History of Tennessee
A full size scan of the first page of the letter may be seen here.