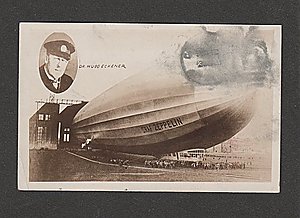 In 1871, the U.S. government issued a new series of documentary revenue stamps to replace the 1862 “first issue” stamps.  Counterfeiting and chemical removal of cancellations from the first issue stamps prompted this decision.

Unlike the first issue stamps, the second issue varieties were printed in at least 2 colors, with the $200 and $500 varieties printed in three colors as an additional security measure.  Given the three colors, elaborate designs and ornate scrollwork on these two stamps, they are often referred to as the small and large “Persian rug” revenue stamps.  The $500 stamp especially resembles a hand-woven rug as seen with the two stamps superimposed on images of Persian rugs, Figures 1 and 2. 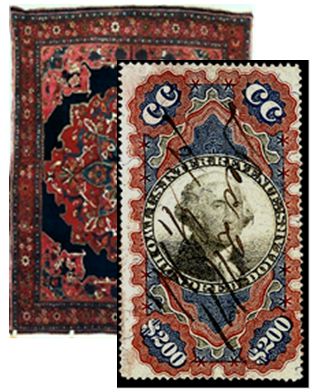 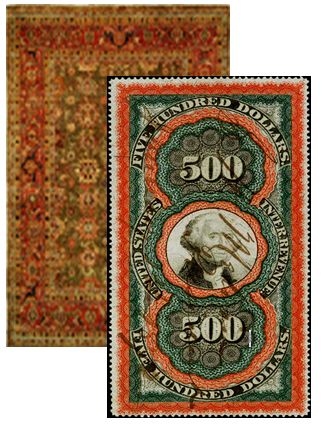 The $200 small Persian Rug had a printing of 446 copies, with approximately 125 surviving examples. The stamps were printed one to a sheet, with margins on all four sides. The only surviving full sheet of the small Persian Rug, Figure 3,  was used to pay the tax on the 1872 will of Erastus Corning, Sr. (of Corning Glass Works). Some revenue specialists have reported a second existing copy of the $200 issue with only partial margins intact.

Only four $200 small Persian Rugs surviving on documents have been recorded.  Arguably the most intriguing of this group is the usage on a two-part deed, with part one shown in Figure 4.  Along with three $50 revenues (R131) and a single $10 revenue (R128), the exceptionally well-centered small Persian Rug is highlighted as the key stamp on this document which sold at auction for $11,500. 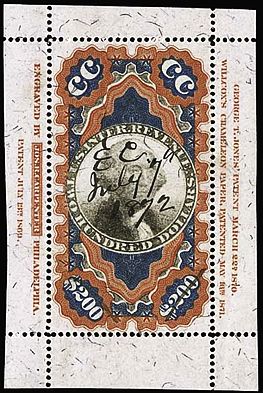 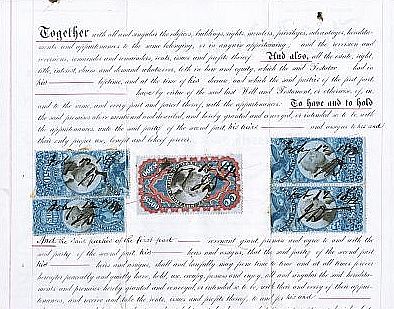 The $500 large Persian Rug is truly a “large” stamp measuring 2 1/8 by 4 inches.  It is considered the most beautiful of all US revenue stamps, and some will contend it even deserves the lofty ranking of the most striking issue in all of U.S. postal history.

Joseph Carpenter’s company, the holder of the printing contract for the Persian Rug stamps, provided the government with several equally stunning designs for a $5,000 stamp as trial color essays, seen in Figure 5.  These were never printed and, thus, never rivaled the beauty of the large Persian Rug stamp. 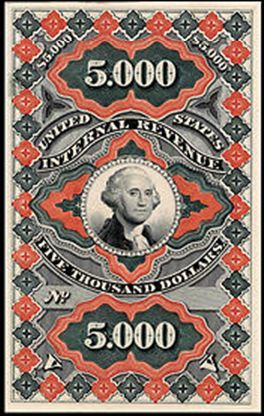 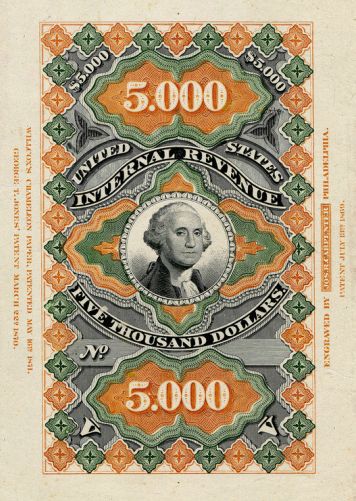 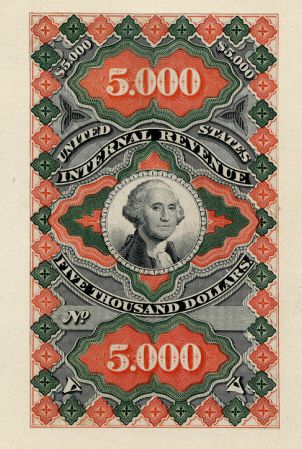 Only 204 of the $500 variety were sold and a mere 67 surviving copies have been recorded. The reason for the small quantity is the simple fact that in the 1870s a $500 revenue stamp would be needed to pay the tax on a $5,000,000 transaction, an enormous sum of money at that time. 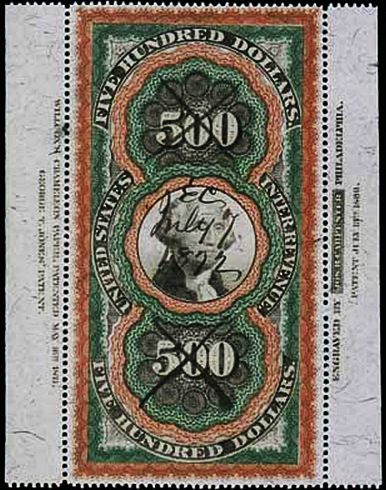 Only one example of the large Persian Rug is known with the side
imprint margins intact, shown in Figure 6.  This stamp was also
purchased along with the full imprint margin $200 variety discussed
above to pay taxes on the will of Erastus Corning, Sr. The stamps were
not applied to the documents but kept with it and remained in the family
for 113 years.

The majority of the large Persian Rugs were used with railroad
mortgages.  One of the most intriguing stories involving revenue
philately are the events surrounding the only recorded $500 large
Persian Rug on an original document.

As reported in Thomas Kingsley’s The Legendary Persian Rug and
shown in Figure 7, affixed to the final page of an 1871 mortgage

Figure 6
Large Variety with Side Margins

of the Morris and Essex Rail Road Co. is a single $500 issue accompanied by a less significant 25-cent second issue revenue (R112C). 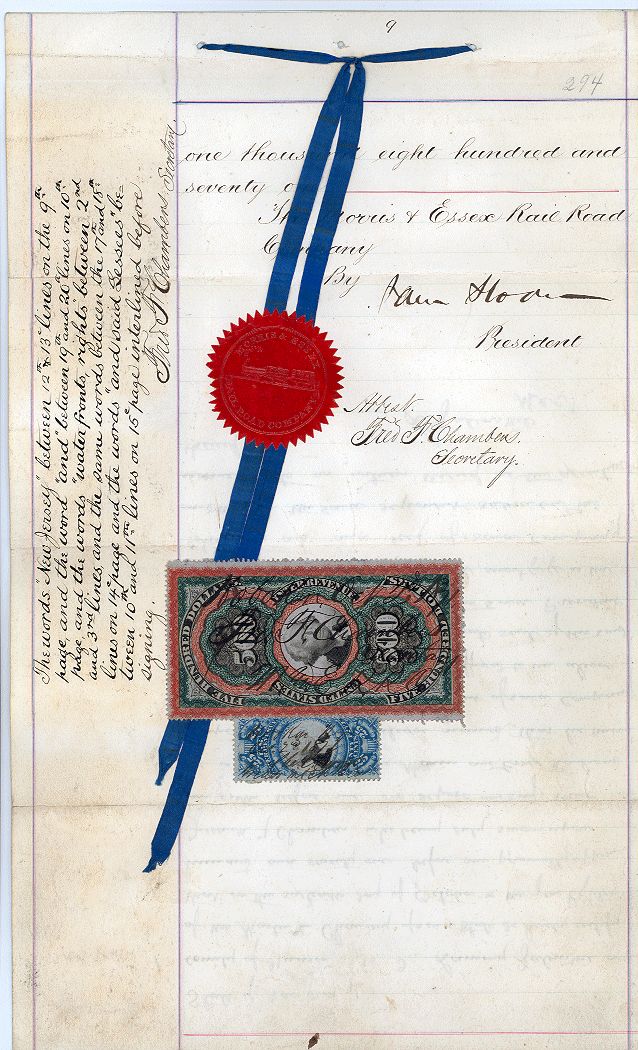 But the entire four-page document bore ten of the large Persian rug stamps: three pages had three stamps each, and the final page with the single stamp.

In 1949, the auction firm of Hugh Barr classified the document as a “remarkable showpiece and should really be preserved in its entirety if a buyer who appreciates the value of such an item can be found.”

Surprisingly and unfortunately, however, that same auction firm did not leave the piece intact. Maintaining that they needed to ensure the true condition of the stamps for accurate auction pricing, they stated in their catalog that “we have removed all but one so that both front and back can be examined. They are numbered, however, so that they can be replaced on the original document should the buyer so desire. To satisfy all prospective bidders, who might want either a single stamp or any group of the lot, the ten stamps will first be offered singly and then as one lot.”

With a $1,250 Scott catalog value at the time of the auction, the nine stamps that had been removed from the document and the tenth example remaining on the final page, brought bids totaling $5,275.

But bids for the combined lots were less and, consequently, the stamps were sold individually.

Ed Lipson, the legendary collector of revenue stamped paper used for bank checks and other documents, purchased the intact final page from Harmer’s of New York in a November, 1969 sale.  Sold in 1999, it is reported that the piece is currently included in a “prominent Western collection.”

Recent auction sales of the $500 large Persian Rug have realized prices from $10,000 to $14,500. The stamp typically has a few faults so, of course, the higher sale amounts were for copies that were well-centered with rich colors, sharp impressions and had only minor faults.

The "Persian Rugs" are truly extraordinary stamps and have a well-deserved reputation as unparalled classics of revenue philately.

The premier organization for collectors of US revenue stamps is the American Revenue Association. The ARA publishes a bimontly magazine, The American Revenuer. Membership information can be obtained from Eric Jackson at eric@revenuer.com or on his website, www.ericjackson.com.