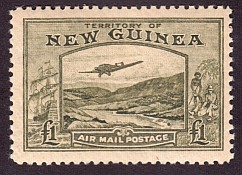 A scanner can be a great deal more than a tool used to create pictures to e-mail to Aunt Nellie. It can be your own personal philatelic sleuth.

I just purchased a new Canon D1250U2 scanner which can scan to 1200x2400 dpi. This kind of scanner with the right software can be very helpful in detecting varieties in your stamps which may otherwise be difficult to find. Most modern scanners should be able to do this, as long as you can scan at around 600 dpi.

In my first example, I scanned at 720dpi and am worked with the Australian King George V 2c red Die II with the multiple A and crown watermark. (Note: the images in this article have been greatly reduced in size to save space. Hence, the resolution is also lower. When you do it at home this type of scanning provides great detail.)

Here are the steps to use:

First, put two copies of the same stamp next to each other on the scanner. Make sure that they are as close to parallel with each other as you can make them. Otherwise it will be harder later on. Scan the stamps at your chosen resolution and you end up with Figure 1:

You will notice that there is very little difference between these two stamps except in the postmarks. Next, create a negative image as shown in figure 2.

It is important to have the right program for the next step. The program that came with my Canon Scanner does the job and I would guess that most other graphic programs would as well. You need to form a picture with multiple layers. On one layer you put the first scan of the stamps with normal colours and on the second layer you put the second scan with the negative colours. If you make the bottom layer opaque and the top layer 50% opaque (same as 50% transparent!) then you will end up an image like figure 3, just a grey screen:

The reason for this is that the negative colours have cancelled out the positive colours and neutral grey is left. If this happens, things are going very well. (It’s hard to believe a grey screen is useful, but it is).

Now for the fun part. Focus just on the top layer, select the left hand stamp, drag it across and place it on the right-hand side. Then put both layers back on and as carefully as you can align the left stamp on top of the right hand stamp. This is where you will tell how good you were at making your stamps parallel; the better your alignment the easier the next step is. Once again a number of parts should cancel themselves out as you saw in figure 3 (the image will not go completely grey unless the stamps are perfectly aligned). However, any differences between the stamp will now stand out.

For easier comparison, I convert the picture that is left from 24 bit colour to 8 bit greyscale. After conversion, all the sections that are black instead of grey represent differences between the stamps. The postmarks will always show up, which is why mint stamps would be easier for this but are not required. Some of the differences will be the reverse and be in white. To see them as black, create a negative of this 8 bit greyscale picture and any other differences (especially the second postmark) will now appear. Figure 4 below shows a stamp in 8 bit greyscale:

The black letters MA from the postmark are clearly seen down the bottom left, the marks on the forehead of the king are also clearly seen in black, as is the circular postmark on the bottom right. Interestingly there is also a small black mark on the head of the emu to the right of the king's portrait. This is not a mark from a postmark, but instead shows a difference between the two stamps.

If we look closely at that part on the two original stamps, we can see the difference clearly in Figure 5, below. This is known as the Horned Emu variety:

Similarly, if the negative colour is taken from Figure 4 we get figure 6:

We can now see the second circular postmark clearly in black. There is also a mark behind the king's ear and lower down on his neck that does not appear to be from the postmark. Note that the mark near the emu is now not as obvious as it is white. Figure 7 below shows in detail the differences on the king's neck and ear. There are two missing sections of dye. This technique could be used with any two "identical" stamps to reveal hitherto unnoticed differences. Of course, the magnifying glass is the tried-and-true way of looking for varieties without all the technology. But a scanner will help you spot things you were not even looking for!


Please send your comments and questions to author Scott Gilmore.