Roses on Stamps
The Rose and its Cultural History

Roses have been blooming for thousands of years, since long before people began to take an interest in them. In those early days rose blooms were very modest, with just five petals, like the wild roses now found in hedgerows. Rose-breeding probably began in Chinese gardens around 2700 BC. However, compared with peonies or chrysanthemums, roses were not held in great esteem, though it was not long before the ancient Persians discovered they could be used to make highly valued rose oil and rose water. 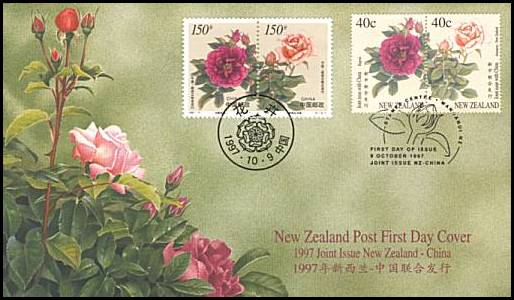 From Persia they presumably came to the Mediterranean region, where various references to them are found in the writings of Homer and other poets, indicating that roses were very popular with the ancient Greeks and had already been crowned "Queen of Flowers". By this time, the modest wallflower had doubtless been bred into a bloom with about 60 petals -- a flower ideally suited to taking Roman high society by storm. Extravagant Roman orgies did little for the image of the rose as the "Queen of Flowers". The notorious Emperor Nero decorated his debauched festivities with incredible quantities of roses, and Emperor Heliogabal showered his guests with so many petals that some of them even suffocated.

Thus, in Roman times, roses came to be equated with a dissolute life style. They were extensively planted around Rome, ultimately reducing them to a mass product. The collapse of Rome and its Empire marked the end of the first Golden Age of the rose which spent the "grey" Middle Ages in the shadows. Without Rome's dissipated celebrations the "Queen of Flowers" was condemned to oblivion and only survived the following centuries because its medicinal and cosmetic properties secured it a place in some convent and monastery gardens.  The world's biggest industry of rose oils today take place in Bulgaria in the "Valley of Roses".

Charlemagne's edict dating from 794 which prescribed the cultivation of fruit, medicinal plants, vegetables and decorative plants in the imperial free cities gave the rose a fresh lease of life -- and its rank as "Queen" naturally placed it at the top of the list.

Today Bulgaria is one of the most important rose breeding countries of Europe, and midway between the capital Sofia and The Black Sea is the Valley of the Roses (Rozovata dolina). Being a sun baked and dusty place most of the summer, in May and early June it's magically transformed by the blooms that give it its name. The rose-growing area produces seventy percent of the world's attar -- extract -- of roses. Considering that perfumers pay more than 45 million US-dollars a year for this, it's not surprising that roses are known as "Bulgaria's Scented Gold". Only the red and white roses are used, not the yellow or other hybrids.

Bulgaria 1970. A lovely selection of roses from the Bulgarian Rose Valley.

However, the true comeback of the rose was delayed until the late Middle Ages when it became a Christian symbol. The white rose was seen as standing for the innocence and purity of Maria, while red roses symbolized the blood of Christ, and the thorns represented sin. 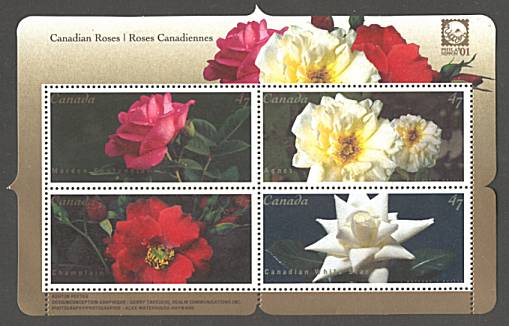 Canada 2001. Souvenir sheet issued for PhilaNippon2001.The special feature of the sheet is the four strange perforations in the selvedge, symbolizing the thorns. The sheet's background colour changes from whitish golden to dark golden, upwards and down. The face value of each stamp is 47c.

The worldly significance of the rose as an envoy of love, beauty and sensuality was never lost and occasionally generated some strange phenomena. During the reign of Queen Victoria the French and English refined this "earthly" symbolism into a complex language, which is partly reflected in this set of the Victorian roses from the United States.

In those days not only the colour and shape of the roses, but also the way they were presented, accepted and worn were loaded with significance. A yellow rose from an admirer told the object of his affections that everything about her was enchanting. If she accepted the rose with her right hand, the suitor could breathe a sign of relief, as this meant that she looked favourably on his attentions.