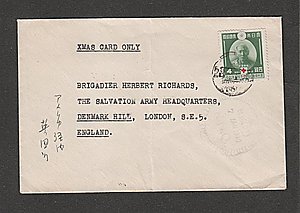 During the period of colonial expansion France issued a series of stamps known as the Navigation and Commerce series, also called the groupe type stamps. The stamp was designed by a prominent engraver of the time Louis-Eugene Mouchon. These are a key-type design with the name of each individual colony in the block at the base of the stamp. It was released beginning in 1892 and was in use for several decades with various overprints throughout the colonial empire.

A part of the french colonies subject, an attractive stamp, used all over the world and over a long period of time makes this issue very popular. Due to the large variety of usage there has also been a lot of study on the creation of these stamps as well as their postal history. That is not the focus of this short article but if you have further interest in the subject, Ed Grabowski is more than likely the the most knowledgable expert. He has many national awards including Grands with his exhibits. They cover many of the colonies and routes, ect in relation to the use of the stamp.

The purpose of this brief paper is an introduction to the forgeries of this popular stamp. There is also an exhibit in the exhibits section posted. It is a short study of these forgeries which has won several awards at smaller shows.

Even though most of the issues in the series are not very expensive most, if not all of them have been forged by a man named Francois Fournier. He was a business man from the turn of the last century. As the hobby of stamp collecting bloomed there was an opportunity to service those hungry collectors with easily accessible alternatives to genuine stamps. Fournier operated openly creating what he called facsimiles of stamps created for the philatelic market. He had catalogs and even a magazine for a while. You could fill the spaces in your album quite quickly without having to hunt and wait to find them from the pesky odd ball places like Indo-Chine!

Since he was not attempting to steal postal revenue his business was fairly legitimate and was forthright in stating that his were “works of art” to enhance the collector's stamp album.  However, the challenge for us now is the fact that due to the proliferation of his creations and their inclusion in many old time collections we need to be aware and check each and every stamp that we add to our collection from this series. Fortunately, it is a rather easy stamp to identify. While he created all the issues, overprints, and even the errors it is not difficult to spot the forgeries because the base stamp has 3 easily spotted differences. First, the hand in the middle holding the staff is not developed with all fingers. Second, the bottom fruit of the cornucopia is flat and melded into the base. Third the figure on the right has no belly button. These can all be quickly seen in the illustrations and with the enlargement it is also fairly easy to see the lack of quality in general in the forgery. (Please check the first and second pg of the exhibit for illustrations)

Fournier advertised over 3500 different issues from hundreds of countries. What shocked me and what we as collectors need to heed as a warning is that they were not all the high value issues ! We need to protect ourselves, be educated and look at all the stamps we place in our collections as genuine. I have enjoyed expanding the study of forgeries as a new topic. It is even fun to collect fake stamps! What a fantastic hobby!