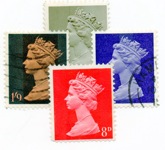 Voyager Missions to the Outer Planets

The Voyager probes were originally conceived as part of the Mariner program and designated Mariner-11 & 12. They were then moved into a separate program named Mariner/Jupiter/Saturn later renamed Voyager because it felt that the probes design had moved sufficiently from the Mariner family that merited a separate name.

The development of the Voyager spacecraft coincided with the alignment of the planets called the Grand Tour. The Grand Tour was a linked series of gravity assist that with only a minimal fuel needed for course corrections would enable a single spacecraft to visit Jupiter, Saturn, Uranus and Neptune and would only take twelve years.

Voyager-2 was launched on August 20, 1977 on a slower trajectory that will allow it with the aid of gravity assists to fly by Jupiter, Saturn, Uranus and Neptune. Voyager-2 will encounter Jupiter after Voyager-1 which was launched second.

Voyager-1 was launched on September 5, 1977. Voyager-1 will flyby Jupiter and Saturn and image Titan before leaving the solar system.

Voyager-2 Jupiter encounter took place on July 9, 1979 at a distance of 350,000 miles from the cloud tops and discovered rings around the planet as well as volcanic activity on the moon Io.

Voyager-1 Saturn encounter took place on November 12, 1980 with spacecraft coming 77,000 miles above the cloud tops. The cameras detected complex structures in the rings and studied the atmosphere of Saturn and its giant moon Titan. Saturn was the last planet Voyager-1 will fly by due to the trajectory to image Titan.

Voyager-2 closest encounter to Uranus took place on January 24, 1986 when Voyager came to within 50,600 miles above the cloud tops. Voyager discovered 10 previously unknown moons of Uranus, studied the planet’s unique atmosphere and examined the ring system which was discovered in 1977.

The Voyagers will continue to transmit data until about 2015.