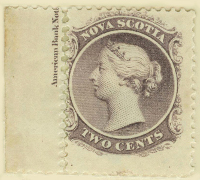 One of the most controversial figures in Indian history during the 20th century was the charismatic Subhas Chandra Bose, who was born at Cuttack in the federal state Orisa on 23 January 1897. He was a remarkable student who finished his education at Cambridge and then returned home to India with a degree as civil servant. Back home at the age of around 30 he threw himself into the fight for India's Independence, and together with Jawarhalal Nehru he became a Committee Member of the Indian National Congress (INC). Later he became chairman for the Bengal province's Local Congress, Lord Mayor in Calcutta, and in 1938 the President of INC.

The biggest impact Bose's dream of a Free India (AZAD HIND) had on philately were stamps never issued. They were designed by Axter Heudtlass, a renowned German artist, and produced in photo gravure by The German Printing House in Berlin. They were intended as charity labels for the benefit of the Indian Legion.

Bose disagreed strongly with Mahatma Ghandi about the latter's passive resistance policy, which Bose felt did not lead to the ultimate goal of expelling the British from India. As a result of his political standpoint he turned to more treacherous methods and until 1940 he was often imprisoned by the British Government in India. After a hunger-strike in 1941 he was finally released and left in secrecy for Kabul in Afghanistan from where he hoped to be able to go to Germany and obtain Hitler's support for India's liberation. The Nazis, welcoming any opportunity to create problems for England, negotiated with Stalin for permission to let the Indian rebel pass through the Soviet Union on his way to Germany -- this happened during the summer 1941 before the German invasion of the Soviet Union. 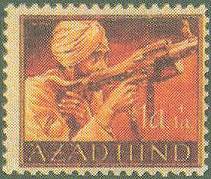 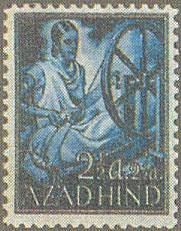 Once in Germany Bose was granted permission to visit the POWs and was able to recruit a considerable number of men to form an Indian legion, the basis for the Indian National Army (INA). Neither Hitler nor Mussolini were prepared to support Bose in his work for liberating India, but gave him all the same their moral support. However, at this moment of history Hitler had an unclear agreement with Churchill that the latter could maintain "his" British Empire against giving Hitler free hands in Europe, so in reality Hitler put Bose off with talking.

The Indian leader had no wish to stay put in Germany, so with the dramatic change in the general situation caused by the Japanese attack on Pearl Harbor and the invasion of the Philippines and Malaya, he grabbed the opportunity and addressed the military attache in Berlin, major Yamamoto, with a wish to be transferred to The Far East, and he left Germany on 8 February 1943 onboard a submarine bound for Asia. Three months later, in The Indian Ocean, he was transferred to another submarine heading for Sumatra, and from there he was brought to Tokyo by an airplane. 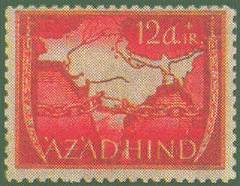 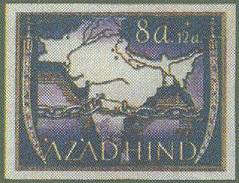 12 ana + 1 rupee (red), and 8 ana + 12 rupees (deep violet). Both stamps depict a map of India in chains, surrounded by 2 swords. These labels, both of different values and colours are known both perforate and imperforate.

In Japan Bose was warmly welcomed by the Japanese Minister for War, general Tojo, and was granted an unconditional support, including a declaration from the Japanese Parliament concerning the Japanese support for the liberation of India -- that is after a due time under Japanese administration! Bose happily accepted these conditions. For their part, the Japanese proposed Bose as President-to-be of the Indian Liberation Movement, and in August 1943 he was promoted as Commander General of the reorganized and strongly enlarged INA, having most of its manpower from the 45,000 privates captured when Singapore fell.

Despite the fact that INA's military equipment was provided by Japan, Bose insisted that INA should be a fully independent military force, paid by Indian communities in South East Asia. On 21 October 1943 Japan acknowledged and supported him as President for ARZI Hukumat-e-Hind (The Provisional Government of a Free India), and this was no formal gesture. With great personal strength he dominated the big East Asian Conference held in Tokyo in November 1943 convincing Japan, who had yesteryear conquered Anadaman and the Nicobar Islands, that these locations be ceded to him, still leaving superior control to the Japanese navy. 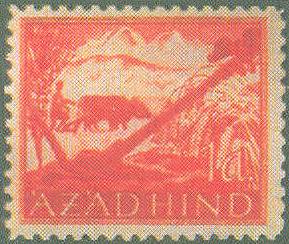 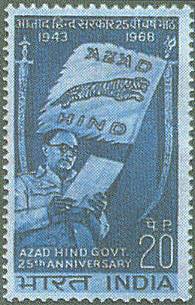 1 ana (red) shows a peasant ploughing his land in front of the Himalayas, and 20 anas (blue, vertical) shows a leaping tiger in the flag of Free India.

After the end of WWII Bose planned to go to Tokyo and from there to Manchuria where he would surrender to Russia. However, his plane crashed on 27 August 1945 in Taiwan, and Bose survived the crash only by one day. He died at a hospital in Taipei on 28 August 1945.

After the war a considerable amount of AZAD HIND labels were stolen by allied soldiers from the German Printing House in Berlin and put into circulation on the philatelic market.

Philatelic Notes
A considerable number of Indian stamps were overprinted with large numerals, with a prefixed period descretely marking the transition from anas and rupees to Japanese yen and sen. These overprints remained in use until October 1945, when the islands were returned to India. These overprints are much sought-after as postfresh, and are very rare on cover. Stamps of face value 1 pie (violet or reddish-brown) and 1 ana (green) were produced in Rangoon (Burma), and apparently used on INA-post mailed within the parts of India occupied by Japan. They show sunrays radiating from the Red Fort in Delhi above the slogan "Chalo Delhi", signifying the resistance movement's ultimate goal. The inscription "Provisional Indian Government" appears in both Hindi and Roman characters.

This article first appeared in the Danish philatelic magazine "The Stamp Collector" No. 1/2003, excerpted from an article in the British "Stamp Magazine".