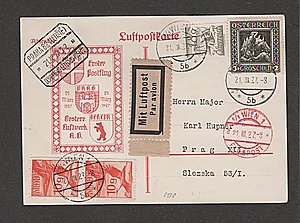 Gold in the Pan
Some thoughts about using philatelic expertizing services

There are as many reasons why people collect stamps as there are collectors. I collect for several reasons, but I must admit to one motivation; I’m a treasure hunter at heart. I get the same thrill from finding a valuable stamp among a horde of stamps and covers, as a gold prospector gets when he finds a speck of gold at the bottom of his pan. And just like a prospector who takes his gold to an assayer to assure its authenticity, I take my prospective stamp treasures to an expert for verification.

There are three well known philatelic expertizing services; The American Philatelic Expertizing Service (APEX), Professional Stamp Experts (PSE) and The Philatelic Foundation (PF).  Each of them will review philatelic items for a fee and issue a certificate stating their opinion as to the item’s authenticity and identify any faults (creases, cuts, thins, etc.) found. The PSE will also grade the item.

There is a less known expertizing service advertised in the classified section of the American Philatelist, the journal of APS, and mentioned on several web sites I frequent. It reviews US stamps and covers only. W.R. Weiss, Jr. says he will offer an opinion for $10 per item, and he will provide a certificate for $15 per item.  I can’t vouch for this service personally but I see auction houses and others do accept his pronouncements.

I’m a member of the American Philatelic Society, so my experience has been exclusively with APEX because members receive a significant discount for their services.  A member will pay $25 (minimum) or 2% of catalogue value regardless of condition not to exceed $400. Non-members pay $45, or 4% up to a maximum of $800.

I collect the US 3-Cent Washington stamp of 1861; the civil war common postage of the north. Actually, I collect that stamp and all of its various cousins who share the A25 Scott catalogue design number.  I’m usually looking for cancellations. Often I purchase a group of Scott US #65 and #94 stamps well below their individual catalogue (Scott 2006) values of $3 and $10, respectively. Then the prospecting begins.

One such group I bought on the internet at stampauctionnetwork.com. I wanted them for their fancy cancels. One particular stamp had the Weston “W” provisional precancel. On closer inspection of this item I saw a grill on the backside larger than the 9x13mm grill of the common Scott #94. In fact it looked to me like it was 13x16mm. I submitted the stamp to APEX for their opinion. About two months later I received the stamp and a beautiful certificate stating it was a, “Scott No. 83, C-grill nearly pressed out, used with…” Wow, a Scott #83 whose catalogue value is $1,100! Even though the pressed-out grill made it less valuable, it was still quite a find.

Another stamp in the same group had an ordinary radial cancel (of which I have many) but it too had a large grill I suspected was 11x14mm. Away it went to APEX and back it came confirmed to be a Scott #85, another valuable stamp.

Several years ago I had an opportunity to buy a damaged Scott #65 with the “Devil with pitchfork” cancel of West Meriden, Connecticut. It was a bargain I simply couldn’t pass up. But being a highly prized fancy cancel, there was a good chance it was a fake. I knew I was taking a big risk. Later I sent it to APEX with my fingers crossed. I was thankful to learn my purchase was indeed genuine. Upon reflection, however, I promised myself never again to buy similar items without first getting an expert opinion no matter how attractive the price.

Not all my submittals to experts have yielded positive results. Years ago I purchased what I was convinced was the most beautiful orange cancel I had ever seen on a Scott #65 of superb condition and centering. An orange cancel turns an ordinarily #65 from a $3 CV stamp into a $150 CV stamp. I could barely contain my joy as I handed the dealer a ten dollar bill; the full asking price. I was so proud of my astute purchase that I wanted an APEX certificate to display beside my gem. Even though it cost me $20 to do so (at the time), I figured it would more than pay for itself if I ever wanted to sell the stamp. Several weeks later when I opened the certificate I found to my surprise the stamp’s cancel was a common “red cancel”. Oops, $30 spent for an inexpensive stamp.

I once purchased a large accumulation of supposedly #65s from a dealer at the Sarasota Stamp Show. That group of stamps kept me busy for hundreds of hours. Indeed I did find many interesting cancels and a few grilled stamps. Among the hundreds of stamps however, one stood out. It had a purplish/pink color and it was beautifully centered and flawless. My hands shook as I held it with tongs under a bright natural florescent light at my desk. Could this be the prized pigeon blood color of the Scott #64a ($3,750 CV)? At the very least it was a perfect example of the pink Scott #64 ($850 CV) or Scott #64b ($150 CV); right?. Nope, instead the returned APEX certificate reviled it to be a “genuine Scott #65, bright rose,..." but smeared with purple ink whose catalogue value was $3. Although disappointed, it remains in my collection today as a curiosity.

The lesson I’ve learned over the years is that you should be reasonably sure you are submitting a valuable and sound stamp to the experts, otherwise the expense may not be justified. But even when you are convinced, as I was in the above two cases, not all submittals will go the way you wish. After all, we may know a lot about stamps but most of us are not experts.

Regardless of your motivation for being a stamp collector, there are times when you should send items in for expert evaluation.  If you believe a stamp to be of high worth ($200 or more),  you are reasonably confident you have correctly identified it, you believe it to be fault-free, and you want the experts to confirm your findings—send it in.

Remember too that a collection whose most prized individuals have certificates makes the entire collection worth more because the buyer doesn’t have to discount his offer to protect himself against misidentified and repaired faulty items.

Colors, grills, watermarks, cracked plate varieties, paper varieties, etc. can be extremely difficult to determine and experts can correctly identify these. Problems like repaired faults, added perforations and removed cancels can be quite difficult to spot. An expertizing service can provide a clean bill of health for a stamp.

Above all else remember to ask the seller of an expensive dubious item one question.  “Will my money be refunded should a service like APEX say the item is not as advertised?” If the answer is no, look elsewhere.