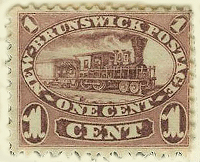 The Allied Military Government (AMG) of the United States and Great Britain jointly issued occupation stamps for use in Germany following the close of World War II. Most of these stamps were issued in 1945. The 1 Reichsmark and a color variety of the 20 pfennig (listed only by Michel) were issued in 1946. The stamps were in use until the creation of the German Federal Republic in 1949.

Thirty-five stamps were printed. The stamps remain common today, and are easily found. Printing quantities ran from 670,000 for the 80 pfennig stamp to 1 billion for the 1 Reichsmark stamp. There are three distinct printings that are grouped into three sets by Scott. One set was given major catalog numbers, while the other two are assigned minor numbers. These are:

Gibbons lists these stamps under Section II of Germany: Allied Occupation with catalog numbers A1 through A35.

Michel lists the thirty-five stamps in its German Specialized Catalog under the Allied Occupations: American and British Zones. Michel also catalogs hundreds of varieties of these stamps. That is beyond the scope of this article.

While, as Michel shows, there are many varieties with these stamps, there is an easy way to distinguish between the three basic printings. Unfortunately, the Scott Catalog does a bad job providing information on how to identify these stamps. As a result collections are usually found with the stamps misidentified. So, the question remains, "How does one identify the basic printings of these stamps?"

Here is an image of the three types (Types I, II, and III from left to right):

Scott describes the three printing types based on paper thickness (either thick or medium - whatever that is), gum (yellow or white - hard to tell on many as the gum tends to tone into a yellow shade after over 60 years since they were printed), size (all the same, except for the larger-sized stamps from the Type III set that are not found in the minor numbered sets), and perforations (with Types I and III sometimes having the same perforations.) With Scott, the best way to identify these stamps is to get out a micrometer and determine the thickness of the so-called thick and medium papers. That is not a good idea since the stamps were printed on different paper stock due to post-war shortages.

Identifying Type II Stamps - The easiest set to identify is the Type II stamps. These are all perforated 14. Types I and III are not.

This is Type I:

On Type I, to the left of the "P" and "G", there is only the stamp color on the other side of the vertical line to the right of the ornaments.

This is Type III:

On Type III, to the left of the "P" and "G", there are small white shapes on the other side of the vertical line to the right of the ornaments. This appears on all Type III stamps.

There it is. Nice and easy to identify these three sets of stamps that seem to look alike. Now go and check your collection to make sure you have the stamps in the correct spaces!